Lusaka School then and now

This is Lusaka's first school house -- probably started in 1908, by the Afrikaaner community -- you can read a list of some of the people enrolled here elsewhere on this blog. 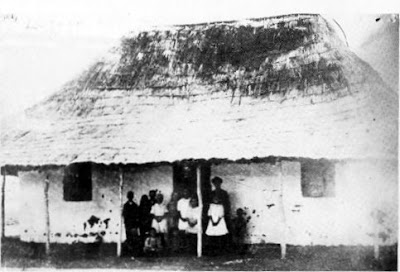 The first picture above is from the national archives, and is included in Richard Sampson's book 'So this was Lusakaas'. It shows the original building from about 1910. Sampson also has quotes from a Mrs Maturin:

There was a tiny children's school at Lusakas kept by several colonial and Dutch girls for the surrounding farmers' children. I can't think how they faced the life, for it has none of the compensations of ours. A mud house, swarming with white ants, which ate walls, furniture, clothes, and everything else; poor food at famine prices; intense heat coming on; practically no society, no pleasures, nothing!

The pay given them was cruelly insufficient and they got but scant thanks... for [their] heroism.

Their house is not fit for the accommodation of cattle...

Almost the first question an intending settler will ask is 'What facilities are there for educating children?' And a really truthful answer would not afford him much encouragement. Be it understood that this is no disparagement on the teaching staffs of the Lusakas and Livingstone schools.

Regarding the complaints the school at Lusaka ... [from the Rev. Geldenhuis of the Dutch Reformed Church]. The former requested.. a site for the school teacher's residence and a grant in aid. The ground was immediately given, but before agreeing to pay half the teacher's salary and to otherwise assist, the Administration sought an assurance that instruction would be given in the English language, as in Southern Rhodesia. This assurance has never been given nor can the secretary get any reply on his letters on the subject. Under the circumstances we feel bound to acquit the Administration of all blame... We are in full sympathy with the stipulation as to language.

Following further comment that the Administration was not absolved from blame by the language issue, by August 1910 the foundation of the Government school had been laid.

By 1916 the building had been considerably expanded and continued to operate in this form until 1959, we are told by the 'Peugeot Guide to Lusaka', when the school moved to its new location, eventually becoming Lusaka Boys' School and Lusaka Girls' School and more recently Lusaka High School. 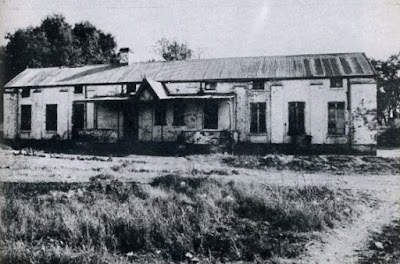 In 1934 the agricultural show was in Lusaka and former mayor, Jack Fisher, recalled in 1979:

The boarders' hostel was in Zomba road, and the boys taking a short cut across often disturbed grazing antelope.

There were about 100 students ... dispersed among four or five teachers. The headmaster was T.C. Deacon, a wiry man with a large nose, a cricketer of note, and a disciplinarian of the old school. Any boy who misbehaved was sent to T.C. with a note simply saying 'please give so-and-so six cuts', and T.C. rarely bothered to ask why.

The woodworking class was conducted by T.C. himself, and in 1934 he decided that it should submit an exhibit to the show... My project was a hat-rack -- 40 years ago no home was complete without one. Everyone wore a hat, most often a sun-helmet, some with a flap at the back to protect the spine, because it was generally believed that the tropical sun would cause heat-stroke without it.

As far as I know it was the first and last time woodworking exhibits were displayed ... by any school. 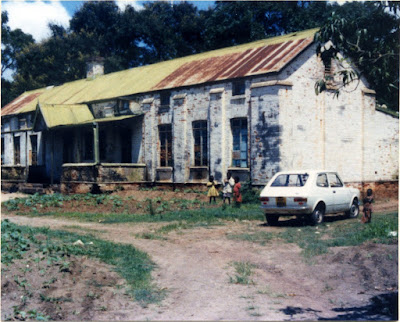 I visited in about 1980 and took this photo, which looks to be contemporary with the previous one from Williams' book. There were people living here at the time, I think government employees.

About 10 years ago, I guess, the place was renovated, I believe funded by students of the school itself. There was a display about the school, which unfortunately I didn't take photos of.

On my return in 2011 I was disappointed to find the gates closed, and the guard off duty somewhere. I managed to raise someone to let me in, but all I found was offices of Zambia National Heritage.  I asked if I there was anything I could see, but there wasn't. Could I see the school register? Unfortunately not. It was  away somewhere, but not on display. Maybe eventually it will be.

There are two museums in Lusaka I know of - the main one (which mostly houses items relating to the independence struggle, but was pretty sparse when I visited it, admittedly some years ago); and Kenneth Kaunda's house. Surely they could have a display in the main museum about the school? About the early properties? About the design of the city? About the history of the various suburbs and how they got their names? About the early inhabitants? About the items held by the national archives?

The new president, Michael Sata, has said that he is going to make tourism a priority. Let us hope that this will mean some progress.

Here's what it looks like now: tidy and in good physical condition, well restored, but really operating for the benefit of national heritage, and not advertised as a place for interested people to visit, or offering anything to see beyond the exterior, if you can get in the gates at all. A shame really for one of the oldest buildings in Lusaka.... 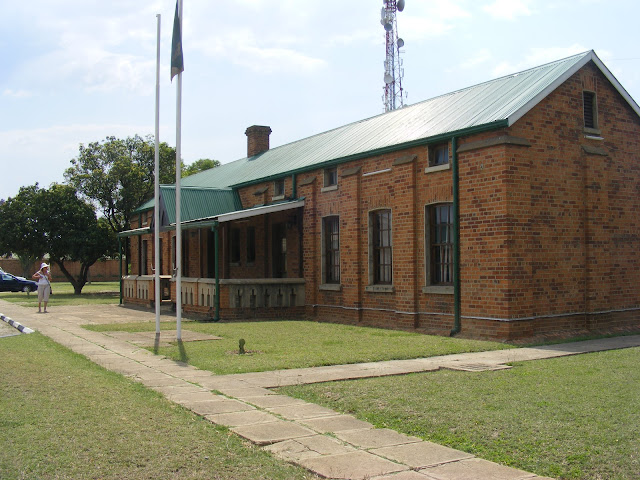 References:
So this was Lusakaas, Richard Sampson, 2nd edition, 1982
Showtime, Dick Hobson, 1979
Adventures beyond the Zambesi, Mrs F. Maturin (as quoted by Sampson; I don't have this one)
The Peugeot Guide to Lusaka, Geoffrey Williams, Zambia Geographical Society, 1983
at 21:42 No comments: