This little letter has been doing the rounds. I don't know who originally shared it, but it is good enough to share again. 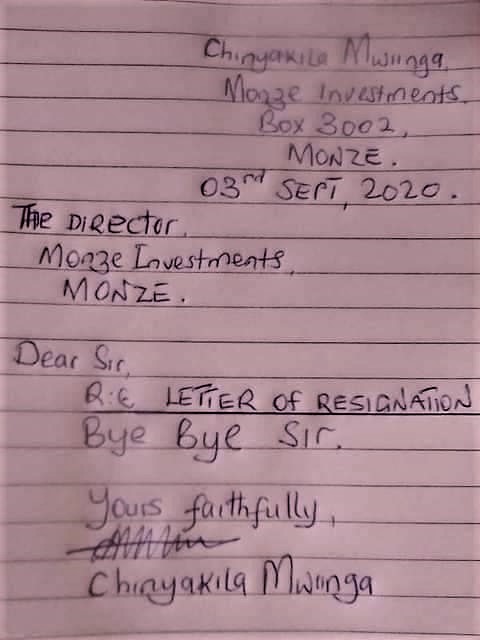 Dear Sir, Re Letter of resignation

That's what I call a letter of resignation 😀 Zambian style.

A Treasure of Darkness (Mabel Shaw) 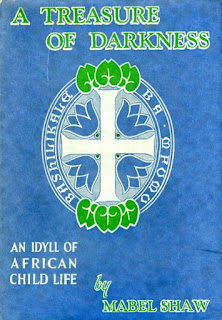 Subtitled 'An idyll of African life', this is another fine and often poetic book by Mabel Shaw, headmistress of the Livingstone Memorial Shaw at Mbereshi in Northern Zambia.  This one is intended for children, published in 1936 and told in the style of a story, but relating true events.

Notice the words Bashilikale ba mfumu around the logo on the dustcover, Bemba for 'the children of the chief'. (See my previous postings on the school for an explanation.)

Photos in the book were taken by 'Ma Sabin', who some googling suggests must be Margaret Sabin.  ('Ma' and 'Ba' are used as honorifics for seniors in this book'.)

Although many children from the school and some of the male staff are mentioned, the story mostly concerns Mary Livingstone, who was adopted by the school as a baby in about 1928, based on Mary being 8 in 1936, when the account ends.

We begin with the story of Joseph and Mary travelling to Bethlehem, as a parallel of sorts with the story of Shambuluma and his wife Mwansa who have been travelling from the mines in the south (though we are not told where exactly). They had been travelling 10 days already on foot and still had 6 or more to go. Mwansa was carrying a sewing machine, a bowl and cloth, while Shambuluma had a spear to protect them and not much else it seems.  Mwansa is pregnant, and exhausted, and dies shortly after giving birth to their baby girl, saying only to take the baby to their village.  Shambuluma buries Mwansa nearby, and carries on with the baby, leaving the sewing machine behind. He considers leaving the baby behind as a lost cause, particularly as he meets people in villages on the way who mock him and tell him the child will never live.  The baby's head is misshapen from being carried on one side for so long. He feeds the child with fruit juice and water, with some watery porridge, but she is getting weaker all the time.

After some days of travelling like this Shambuluma meets a man who tells him to take the child to the people 'of the way of God' at Mbereshi, as they will have milk and he decides to do this rather than to his own village of Kakonde (in the Congo?)  He meets Mapoma from Mbereshi and Ana who call Mabel Shaw ('Mama') and the child is taken in.  The children tell Shaw that she has to keep the baby, and Shambuluma says he will work in the village while they look after it.  However, the baby does not thrive on the powdered milk they have and their cows are nearly dry.

Shaw wonders if the child will do better with a product she has seen advertised on a bus in London, which 'builds bonnie babies', Glaxo, but they have none. Then Solo is dispatched to Elizabethville by bicycle, a 6 day round-trip, and there is a tense wait for him to return. Finally he is seen returning on the 6th day, with 6 tins of Glaxo.

The baby gets stronger and is eventually named Mary, after the mother of Jesus. Shambuluma returns to his village, now having the name Shi-Mary (father of mary). At 10 months, when Mary is baptised the name Livingstone is added, after David Livingstone.

Mary's grandmother comes on foot to visit from 130 miles away, saying only 'you have given her life', and 'my daughter's little baby' before returning to her village. Shambuluma also visits again, bringing gifts of food and news of a half sister to Mary called Dinah, at Kambole. The grandmother dies at this time.

There is a big scare when Mary falls 16 feet from a verandah, but miraculously she is found unharmed.

The rest of the book tells us about Mary's childhood in some detail, including how fond she was of little animals (especially frogs) and her favourite phrases. She seems to have been a lovely little girl and was a favourite with the older children, as we can imagine.

We hear many other tales of school life, the subjects the girls are studying and their chores around the school, also about Mary's friends as well as the older children at the school, in their yellow uniforms.

The children say that Mary must only be taught good things, and they must set a good example for her.

As in the other books often only first names are given, and older people are often not named in full, but here is a further list of names. If you look at the three postings I've done on Mbereshi you can also piece together some more of the detail of who is who and get some idea of ages in some cases by comparison with Mary.

We hear that Nellie Lombe, Ana and Betty went to Bulawayo for 2 years teacher training.

Charity (twin of Felicity)
Chanda
Chewe, Mercy (5)
Chililalila
Chiluba
Chola
Chungu (the cook, who was one of the first girls at the school)
Clarissa (dau of Ba Chali)
Daisy (5)
Dinah (Mary's sister, Kambole)