I've been doing a lot of scanning of old photos and negatives for the past few years, trying to save them from the white ants... In the latest batch I came across this photo, probably from the 1980s, of Georges Mercier's grave at the Old Drift, Livingstone. I am pretty sure that this grave marker was not there on my more recent visit, so I am glad to have uncovered it.

It adds some information to the plaque I posted earlier. The text seems to be: 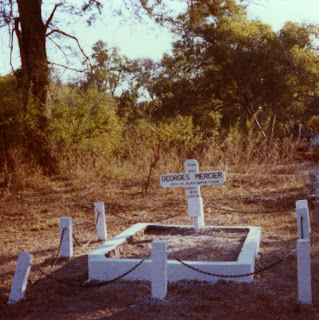 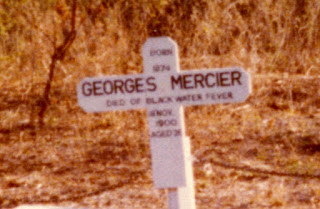 Sunshine and Shade in Central Africa 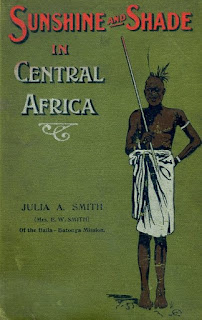 is by Julia A. Smith and published in 1908. Julia was the wife of Edwin W. Smith, Ila Speaking Peoples of Northern Rhodesia

(You can browse a copy at this link.)
who was famous for his work on the Ila language, and wrote

The book concerns their journey to and time at the Baila-Batonga mission at Nanzela, which lies on a tributary of the Kafue River in present day Zambia.


In the usual fashion, they come up by ox wagon from the south, from Aliwal North and via Bulawayo, across the Zambezi, an 8 week journey, in the latter stages of which Mrs Smith is carried by machila.

They have been preceded at Nanzela by the Chapman and Pickering families (Mrs Pickering and daughter Madge are buried there), but are the first to teach in Ila.  Their predecessors seem to have mainly used Sesuto speaking teachers from South Africa and the Smiths also begin in this way. But the people in Nanzela are Ila speaking, and it is not surprising that the mission makes so little progress until Mr Smith starts putting together a grammar of Ila and translating the Bible and hymns.

The Smiths lose their young son but then have a daughter, who they name Matsediso, 'consolation'.

There are some interesting descriptions of the Ila people and their customs and a few photos, including of Mrs Smith's sewing class.

An old man who had some stomach trouble came to us. He said 'Now, moruti [doctor], there is a little dog in my stomach. First he begins to rise up, then he shakes himself, by-and-by he goes round and round after his tail, and then he begins to scratch and claw, and at last he bites me very badly, and the pain is very great'.

Shamatanga (Pauluse) says God is like our shadows, always near us, never leaving us.


Unfortunately there are few full names given for people along the way. The Ila people are also interesting in that they have infancy names and then later names. It is taboo to speak your own name or use it in speaking to someone who has the same name as you (who is instead referred to as 'namesake'). It is taboo to speak your father's, mother's or sister-in-law's names (even in speaking to someone else of that name), or your wife's maiden name, and the wife must be given a new name when one marries. Most early converts seem to have taken on Biblical names on being received into the church.