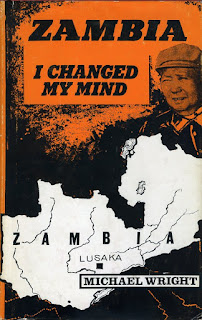 I'd seen this book a few times on eBay and formed a first impression of what it might be like. I was ready to be annoyed, and almost immediately was, but in the end the author makes some good points.

If we are any doubt as to the argument, the inset of Chairman Mao should help to set the scene. The author is concerned about the increasing influence of China in Africa, but actually the book is more about the failure of the political system and the steady erosion of democratic ideas as the one-party system takes hold in the late 1960s. The book leaves us in no doubt that the author considers Africa unready for democracy, that the Zambian constitution is a mockery of the real thing and that English policy towards central Africa is a failure.

Along the way we hear much about Wright's bewilderment with the way things are run and failures to tackle issues as they arise. Sometimes this is justified, other times I am reminded of a visitor who spent time telling everyone that they found an ant in their water, as if this was something to be remarked at.

Michael Wright came to Zambia in 1967 and spent three years lecturing in Economics and Government at Evelyn Hone College in Lusaka, a post advertised through the Ministry of Overseas Development.  He 'changed his mind' because he came from a liberal background, but after his experiences we wonder if he remained a liberal. In fact, he suggests that 'this catastrophe' should not be repeated south of the Zambezi.

You will not be surprised to hear that the book contains many examples of facilities that are not repaired and systems that are not functioning, and yet after three years in the country, and three years since independence, I feel it was a bit premature to trot these examples out as proof of the country's failures.  At the same time, we can see now the continuing failure to tackle major infrastructure issues, in particular water and electricity supply, with areas such as Makeni lately suffering daily power cuts spanning a half day or more, usually during working hours. Imagine the impact on your ability to pump water from your borehole, to flush toilets, to wash clothes, or to keep food in a freezer.  We are getting to the point where everyone will require their own generator.

We hear that on his arrival his disillusionment is still to come, and he hopes for a bright future, as suggested by the new currency names of kwacha (dawn) and ngwee (brightness is coming).

Wright spends a fair amount of time talking about Kaunda's philosophy (said to be developed through correspondence with Colin Morris) of humanism and how nobody can figure out quite what it means, although he asserts that the idea of the 'common man' is taken as meaning that a living is justified by one's position in life, rather than effort.  As the idea of humanism is put into practice it becomes about decent housing, a good diet and charitable effort alongside less helpful ideas such as Simon Kapwepwe's suggestion that English should not be taught in schools.  I remember the backlash against the mini-skirt in the press, as improper and not worthy of Zambian culture. I see this as Zambia finding its feet, deciding what it meant to be Zambian.

Of course, Kaunda was also trying to unite many tribal groups. However, later these worthy ideas are tarnished as it appears that UNIP membership is often a pre-requisite for employment.

There is mention of road renaming, and an attempt to name streets after two Africans who had been hanged for killing a European lady in her car (see elsewhere on this blog for more on this story). But this was rightly quashed, and we should not be surprised, as he is not, that we no longer want a Cecil Rhodes Drive.  On the other hand we have a declaration that Eveyln Hone College was built by the Zambian Government, when it was built by the British South Africa Company, as an example of a revisionist approach.

I was intrigued by mention of the Anglican Cathedral, because I think my father would have been there at the time.  Wright suggests that the church is regarded by the president as a natural instrument of his policies and that he holds sway over the clergy. By way of evidence that the Anglican church is losing its way he cites splitting from the church in Rhodesia, Africanisation, and relaxation of regulations covering marriage. He says 'the church in Lusaka contained some rather odd people' and tells us about a sermon in which the priest (allegedly) said that drug taking was quite acceptable, after all 'look how many people take aspirin or sleeping pills'. But surely this is wilful misinterpretation? Then he suggests that the priest has said the Ten Commandments no longer really apply. Hmm...

After the service, Wright talks to the priest, who defends his position and also military opposition to Rhodesia. Hypothetically speaking, Wright suggests an example of the Epworth mission outside Salisbury, should they be bombed? Regrettably, this might be necessary, the priest is claimed to have said.

I don't think I see my father in the first quote, though I can imagine him taking a strong line against Rhodesia, as I remember him going off to do broadcasts on Radio Freedom, which started with the sound of automatic gunfire, and songs of Umkhonto we Sizwe. I am left wondering if it was him.

Wright claims that the Watch Tower movement talked of the 'miraculous removal of whites and the discomfiture of the missionaries', not something I've heard before.

There's quite a nice chapter about living in Lusaka, touching on places like Munda Wanga and the drive-in cinema up the road, suggesting how nice it could be, but there is always an undercurrent of worry and trouble. For example there is the story of the white girl (unnamed) who, following a quarrel, was beaten so badly by daughters of a minister at her school (somewhere near Woodlands) that she was hospitalised. The minister's daughters were not disciplined afterwards, it seems. There are many such stories, so that we are left with the impression that life is cheap.

In the end I recognise many of the things that Wright says as true, but it still seems a harsh judgement for somebody who spent just three years in the country, however much truth there is in it.  I wonder what happened to Wright afterwards.

The book contains an appendix of references*, mostly from local newspapers, backing up the author's statements.

Most of the names in the book are government officials. I've tried to indicate some of them below:

Email ThisBlogThis!Share to TwitterShare to FacebookShare to Pinterest
Labels: Lusaka

Please leave your comment and I'll get back to you if I can help.