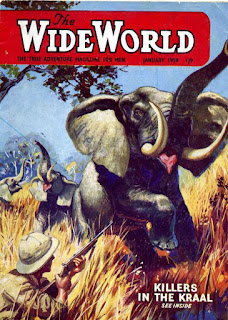 Here is a story from a magazine article written in 1959 for the "Wide World" magazine [1] - "The true adventure magazine for men". It's one of those slightly unbelievable stories you hear, such as might have turned up in 'Jock of the Bushveld'.

The author, Jack Dee (no, not that one) looks quite the part in his beret. He says

"The white man builds a dam, and the Ba-Tonga must move to another home... How will this simple and happy people fare, now that they are come more and more into contact with the outside world?"

I won't  tell the story of the building of Kariba Dam, which is told many places already.You can see some film clips made at the time online at the excellent Pathé News website. There are some good books on the subject, such as Operation Noah, by Charles Lagus [2]. 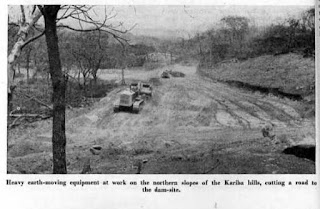 By 1959, many of the people have been moved off their land already.

"Many of them believe that they will later return to their lands of the Valley and the white man's magic will fail"   I've seen the same thing said elsewhere, relating to how the river god, Nyami Nyami, would never let the river be dammed. 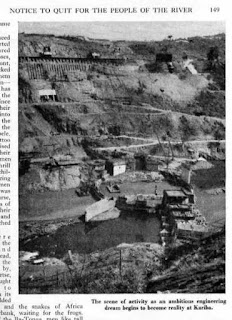 At this stage the operation is proceeding apace, trees are being felled by chains tied between massive iron balls, dragged behind heavy vehicles. Animals are fleeing the waters and being trapped (hence 'operation Noah').

"They grew maize and millet, pumpkins and melons. For their meat they went digging for the fat and juicy rats in their burrows along the high banks.... That was the time when hippo were wont to come out and create havoc among the mealie patches.

A story of these people concerns a woman who was taken by a crocodile and left in its larder, just under the bank... she was half drowned, as well as suffering in dreadful pain from her injuries, when the creature left her there for dead. For crocodiles like their meat to be well on the way to decomposition and the larder is a repository for the purpose.

However, as she was lying in that vile den, the woman thought she could see light through the top earth. Dementedly scrabbling at it with her hands, she managed to break through.... From there she struggled back to the village, to collapse outside one of the huts.

By this time, the drums were already sounding the dance for the dead, for her people were sure that the Great Spirit of the river had claimed her for his own.

Mournfully the women danced, throwing the white ash of the fire over themselves. The drums throbbed, the men sang, and the chief watched, together with the old witchdoctor.

Suddenly, someone came screaming into their midst. As they all ran forward they saw the 'dead' woman rise, and stagger towards her husband. 'It is not she,' they cried.

The witchdoctor demanded that the men take her and throw her back into the river, claiming that it was no longer the same woman, only a body possessed by evil. This must have been so for never had a human come back from the world of the Great Spirit.

And so the poor soul was thrown back into the water".

Apparently this story was recorded by the Northern Rhodesia Police.

When the Tonga left their ancestor's graves behind they touched them with brushwood, and then dragged the staves, without losing contact with the ground, until they reached their new homes. Those old graves are now under water, along with many others of early missionaries, police and hunters.

"May the metamorphosis they must now undergo be not hurtful to them, and may they find, in the new way of life, compensation for the loss of one in which there was much beauty."

Of course, it was not an easy thing for the Tonga to move their homes in this way. The BBC does well to remember this in their Witness programme [3] which points out that even now electricity has not come to many people in the area, and that the hurt of the displacement is not yet forgotten.  Mwiindachi Siamwiza speaks eloquently about the scar that the displacement of his village left.

Those massive balls can still be seen at the museum in Choma, which is worth a stop on your way to Livingstone if you're travelling from Lusaka. In any case it is a place to break your journey, stretch and have a picnic. They also have a great old engine... 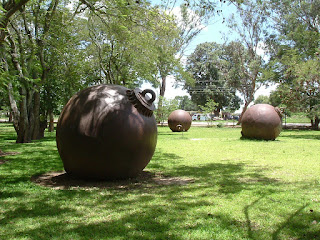 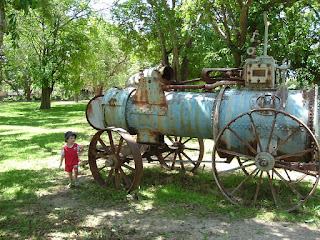 Please leave your comment and I'll get back to you if I can help.